For the metal artist selling their craft, knowing what elements make up your alloys shows a degree of expertise. I believe that our collectors and clients appreciate it when we tell them how it’s made and even what it’s made of. The history of modern metallurgy and alloys can be a useful tool when answering questions about your piece of art. It also provides a foundation if you choose to experiment with making your own alloy or following formulas from the past to make metal alloys.

In antiquity, bronze was the first alloy, or combination of metals, that impacted humanity. The Sumerians in the third millennia BC, developed an alloy of 90 per cent copper to 10 per cent tin. Harder and more chemically resistant than pure copper, societies which utilized bronze tools and weapons easily ruled their neighbours.

During the Bronze Age in Asia, the Copper mines there produced a different quality of Bronze than in Europe, due to the different amounts of alloy naturally occurring in it (usually a percentage of Tin), so the bronze differed slightly. Some of these mines created a bronze that made better musical instruments and mirrors, others made better casting bronze while still others made the best tools and weapons. Different alloys made different quality Bronze.

We have the Persians to thank for the development for carbon steel in the 16th century BC and starting the Iron Age (in which we are arguably still living). Steel is the still the most widely produced metal, and is the building block of modern society. Early carbon steel was produced when iron was hammered and wrought in the presence of carbon (that was released by the fires used to heat it.) Once the iron has been inundated with carbon in the range of 1% its hardness increases and it becomes useful for agricultural tools and weapons because it holds an edge so well. “Cast iron” though has carbon content from 1.7 – 4.5% and doesn’t hold edges very well. Once specific heavy metal elements where isolated, such as magnesium, nickel and chromium, using them as alloys with carbon steel could make the steel take on properties such as stainless, wear resistant, and even corrosion resistant. The Industrial Age and our modern times are built on these steel alloys.

Metalsmiths and Potters, the makers of clay pots and porcelin goods, worked hand-in-hand in the development of pre-18th century alloys. The potters, who where producing high temperature kilns and glazes, were actually refining the ingredients needed to make alloys, and serendipitously isolating metallic elements. Naturally occurring metal salts and metal oxides are the ingredients of many pigments, dyes and glazes. Iron doesn’t occur naturally in a metallic state — except in Iron Meteorites (which are 95% Iron and 4.9% Nickel). It can be refined from Hematite (Iron Oxide), a major source of ore. Once the Mendeleyev Periodic Table of the Elements was published 1869, refinement of elemental metals finally became a science with the isolation and description of the names and behaviours of specific heavy metals.

In ancient times, gold and silver alloys are most evident in the coinage a specific society produced. Nickel-bronze coinage appears in the near-east in the Third Century most likely due to it certain naturally occurring alloys found in local mines. Up until 2000 years ago, coinage was usually bronze, gold or silver. The Egyptians began experimenting with a combination of 50 per cent gold and 50 per cent silver in some artefacts. This alloy is called Electrum, likely referring to the fact that Silver is the best conductor of electricity and heat. 18K yellow gold alloy formula have been evident since King Tutankhamen’s era in 1300 BC Egypt. The same formula used then is the same one that is still in use today (50% Copper and 50% Silver).

The Romans where the first to develop their own gold substitute. During the reign of Caesar Augustus in 20 BC, brass was developed (75 per cent copper and 25 per cent zinc) and put to use in coinage. Because it closely resembled gold, and used less copper than bronze (which is 90 per cent copper and 10 per cent tin) it was quickly adopted and gained popularity. It was even called ‘Aurichalcum’ or Golden Copper. Celtic coinage, which had their start when the Celts began making forgeries of Roman coins, furthered the development of modern brass with an alloy of 60 per cent copper and 40 per cent zinc.

Modern gold alloys used in jewellery are intended to strengthen the gold, which is very soft in its pure form, and produce a more appealing colour. Pure gold (100% AU) is referred to as 24 Karat gold. The term karat is an ancient term for purity and weight based on the Carob bean found in the Middle East. Nowadays, when you hear 14K or 18K gold, it refers to the parts gold in the piece of jewellery. For example; an 18 Karat gold ring has 18/24 parts gold and 6/24 parts of a different metal or alloy.

Common gold alloys in general terms are as follows: 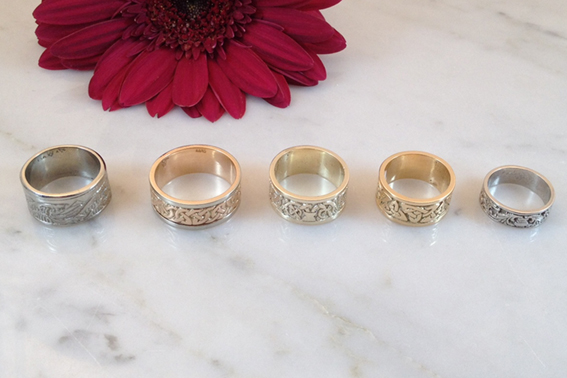 The development of white gold only occurred about 125 years ago. The alloy itself is called German Silver, Nickel Silver or Mock Platinum, and is an alloy of 50 per cent copper, 30 per cent zinc and 20 per cent nickel. Thus if it is alloyed with gold in an 18K mixture (75% fine gold + @25% alloy) an 18 Karat white gold ring will contain 18 parts gold, 3 parts copper, 1.8 parts zinc and 1.2 parts nickel. White metal such as platinum or white gold is perfect for faceted stones set into them because the alloy doesn’t add a yellow colour to a white stone. Such is the popularity of the different gold alloys that many decorative jewellery pieces today have more than one colour of gold alloy in it.

Sterling Silver has its roots in 12th century Germany, where silversmiths developed an alloy of 92.5 parts silver with 7.5 parts copper. This alloy was very hard and useful for coinage. Platinum is alloyed with 10 percent iridium or cobalt depending on the manufacturer. Platinum, in its pure form, is very ductile, but when used in an alloys it becomes very hard and durable.

A craftsman and artist should know all of the elements and ingredients of their media, and the Metalsmith should then know which alloys to combine.

Jason Bellchamber is a custom goldsmith from London Ont. He casts all of his gold and silver pieces himself and makes his own alloy from scratch. He learned by self teaching and apprenticeship in Jewellery Repair beginning in 1990.