Thor is the Scandinavian God of Thunder and the guardian of the Rainbow Bridge separating Valhalla (Heaven) & Earth. His Hammer Mjölnir made him invincible versus any foe. From about the 5th Century to the 12th Century AD Thor’s Hammers were popular amulets worn by people to bring luck, prosperity and strength. The hammer also has a balance of 2 meanings; it can be viewed in a positive aspect as a tool, to construct and build but may also be seen as weapon, if used destructively. In the tales of Thor, he could use it to give life or take it.

This hammer is two sided and is one of my signature pieces. I made it based on the characters of Ragnarok. There are many motifs on it:

The weight of this hammer is quite substantial, the Sterling Silver version weighs about 15 grams! The Gold version weighs 18 grams!  A chain fits through the top of the pendant where the serpent is biting a tube. It may also be finished with a ring through it as well.

Thor’s Hammers were fairly commonplace by the 11th century From Greenland to England to Scandinavia.  It’s argued that the rise of the cult of Thor started as Christianity and the Christian Cross as an amulet was gaining popularity. There is evidence even of a jeweler’s mold that makes 2 Crosses and one Hammer.

I can also make custom Thor’s Hammers as well as custom Rune Pendants. 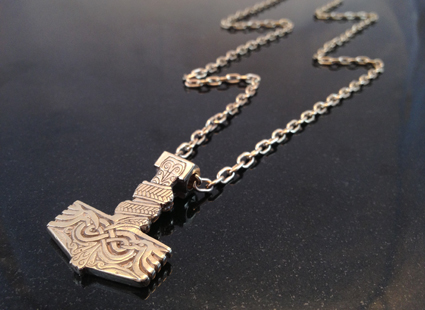 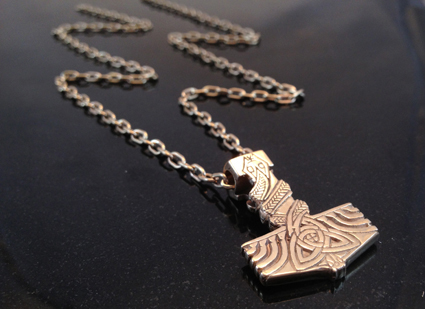 Sleiphnir & Triskele Side of the Hammer with handmade chain by Bellchamber Rings. 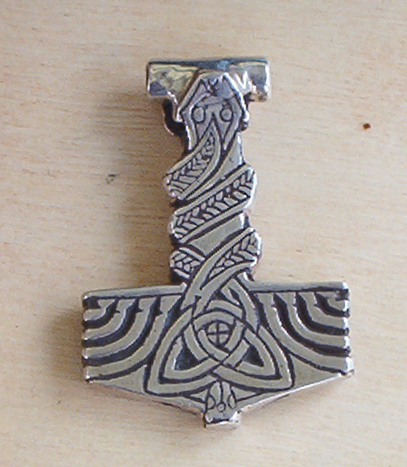 2-sided Sterling Silver Thor’s Hammer. The motifs flow into each other over each side. 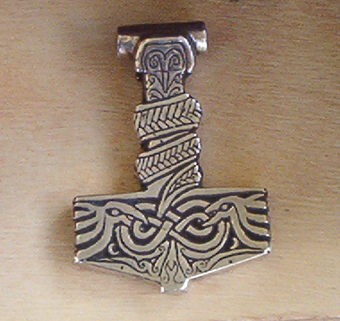 For example, the negative space of the raven’s wings become the horse’s eight legs. 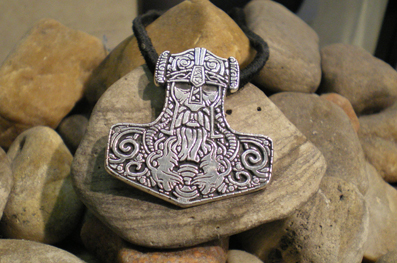 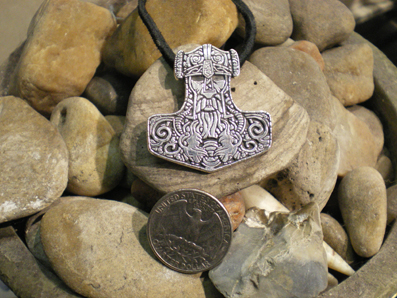 This limited edition one-sided model is available in both Silver and 14K Gold versions. 2-sided models can be made too.

“The elaborate little amulets in Bronze and silver from the tenth century are more complex symbols. Some have faces with round, staring eyes, and sometimes also the beak of a bird of prey, evidently influenced by the familiar motif of the eagle. It seems likely that these were intended to portray the terrible fiery eyes of the god of the lightning, emphasized in the literature, while it is noticeable that the hammer-head sometimes takes the place of a beard. Some of the hammers have elaborate chains, ending in dragon-heads, biting on to the ring which holds the hammer, and these probably symbolize the World Serpent, Thor’s adversary. The ring itself may be a reminder of the sacred ring of Thor, the symbol of law and order, said to be kept in his temples, on which oaths were sworn. There are also patterns of circles and criss-cross lines on the hammers, suggesting rain and lightning.”