The Jelling Cup is an artifact that was found in the city of Jelling, Denmark. It’s attributed to being owned by a Viking King, Gormr, and dates to the 10th Century. 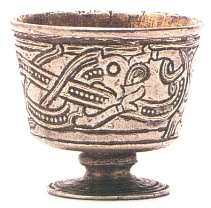 Dragons are symbols of the powerful and supernatural. This motif is an abstract Dragon Mobius typical of early Viking and Celtic designs of the 7th Century. Its style is named for the period called the Jelling Style of Viking and Anglo-Saxon art.

Most of my rings are of equal width all the way around. However this one is very wide 13mm at the crest and 5mm at the back. It was specifically designed for larger fingers, or for people who prefer bold rings.

A mobius is a typical of Viking art and is a symbol of never-ending and balance due to its symmetry.

The ring tapers from 13mm wide to 5mm wide at the back.