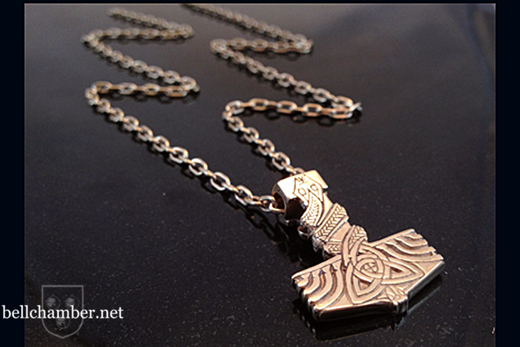 Thor is the Scandinavian God of Thunder and the guardian of the Rainbow Bridge separating Valhalla (Heaven) & Earth. His Hammer Mjölnir made him invincible versus any foe. From about the 5th Century to the 12th Century AD Thor’s Hammers were popular amulets worn by people to bring Luck, Prosperity and Strength. The hammer also has a balance of 2 meanings; it can be viewed in a positive aspect as a tool, to construct and build but may also be seen as weapon, if used destructively. In the tales of Thor, he could use it to give life or take it.
This hammer is two sided and is one of my signature pieces and is limited to 24 editions in gold. I made it based on the characters of Ragnarok. There are many motifs on it: Thor’s Head, The Midgard Serpent, Fenrir Wolf, Odins Ravens: Huggin and Munnin , Odins Horse: Sleiphnir, Odins Eye, Odins Spear: Gungnir , Dragon, Triskele Knot, Valkyrie, The Mobius and Igdrasil, Waxing & Waning Crescents.

The weight of this hammer is quite substantial, the Gold version weighs 18gms! A chain fits through the top of the pendant where the serpent is biting the top (4mm chain or smaller). It may also be finished with an oath ring through it as well.

Thor’s Hammers where fairly common place by the 11th century From Greenland to England to Scandinavia. It’s argued that the rise of the cult of Thor started as Christianity and the Christian Cross as an amulet was gaining popularity. There is evidence even of a jewellers mold that made 2 Crosses and one Hammer. The one in the photo with the custom made chain is edition 9/24 and was produced in 2009. Currently there are 8 remaining in gold and once they are sold then the mold will be broken. Each one comes with a certificate and edition number.

Pictured here is the 2nd side of the Hammer.

Tree of Life rings in Gold and Platinum

One of a Kind Crown Rings

Gemstone Height on a Ring